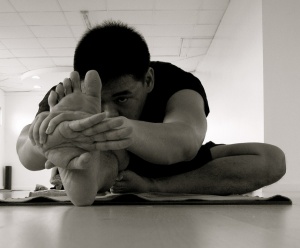 In Janu Sirsasana and many other Yoga Forward Bend Poses, we explore the expansion of the hamstring muscles. The resistance of the hamstrings against the sit bones (ischial tuberosities) limits the motion of the pelvis structure in relation to the thigh bone, thus reducing the amount of forward bending motion we can generate at the hip joint.

By applying the principal of reciprocal inhibition in our Yoga practice, we can manipulate the neural signals of key muscle groups to more effectively relax the hamstrings and to increase our ability to fold into our yoga forward bend poses.

How Does Reciprocal Inhibition Work? Reciprocal inhibition is a basic mechanism where the agonist muscle (contracting or excitory muscle) communicates a neural signal to the antagonist muscle (opposing muscle) causing this opposing muscle to relax. The release of the antagonist muscle allows the agonist muscle to contract and generate a more free movement at the joint (less resistance from the antagonist). To allow for a quicker pathway for communication, this neural signal travels from the agonist to the spinal cord. This signal is received in the spinal cord by a neural center called interneurons. The interneurons then transmit this signal to the antagonist. This is an important communication pathway used by reflex mechanisms so the body can respond quickly with rapid muscle movements (ie moving a hand away from a hot surface). Instead of the signal traveling all the way up to and back from the brain, this signal is instead processed and transmitted at the spinal cord level.

How Does Reciprocal Inhibition Relate to Yoga Poses? Reciprocal inhibition occurs throughout our Yoga practices often without us really aware that we are applying this mechanism. We can, however, consciously apply reciprocal inhibition in key postures to take extra advantage of its’ ability to create greater release in muscle tissues. In Yoga Forward Bends (involving hamstring muscles), we can use the quadriceps to act on the hamstrings through reciprocal inhibition. Even though we are not actually generating movement at the knee joint, engagement of the quadriceps (agonist) will relay a relaxing signal to the hamstrings (antagonist).

Using Janu Sirsasana as an example: Once you have set yourself into Janu Sirsasana with proper alignment, take notice of the resistance that the hamstrings are creating at the sit bone and at the back of the knee. Bring attention into generating a greater, richer flow of breath into these stretching tissues and connection points. Now that you recognize the limit in the range of motion of the hip joint, INHALE and lightly lift or extend the torso away from the thigh to generate space in the vertebrae. Once the torso is lifted, hold the extended spine and slowly EXHALE while contracting the quadriceps. Do NOT push the back of the knee into the mat, but rather reach out through the heel as the knee cap lightly moves towards the thigh bone. Then INHALE and relax the quadricep while lifting the chest bone a little more away from the pubic bone. Finish by EXHALING and rolling the pelvis forward so you sit further into the front of the sit bones and into the extra release of the hamstrings.

This technique can be done more than once in a Yoga pose. Note that you should always breath out when contracting the agonist muscle in order to prevent a sudden rise in blood pressure. Holding the breath during vigorous muscle contractions causes blood pressure to substantially rise – this contraindicated state is called the valsalva maneuver. Now that you understand the principal of reciprocal inhibition, you will mostly likely start to be more conscious when it naturally happens. This mechanism surfaces automatically and often in forward bends. But, when desired, incorporate this mechanism with direct purpose in Janu Sirsasana and other Yoga Forward Bend poses.

Perform reciprocal inhibition techniques with sincere respect so that you are creating healthy space in the hamstrings and not pushing goals into the back body.